Our StoryAbout Our Butchery

Austrian born, Franz Gmeiner started his apprenticeship in Steyer, Ȕber Ősterreich from Meister Zellinger, where he studied to become an artisan butcher and finally became a Fleish Meister himself in 1957.

In 1964 when he and his wife immigrated to South Africa he was an accomplished Austrian polony maker and started working at Prima Meat in JHB before starting his own butchery in 1969 under the name of “Tedstoneville Butchery”. It operated as such for many years, being run only by himself and his wife Johanna where they produced some of the best quality cold meat and smoked sausages in the East Rand.

The abattoir where he used to buy his meat from stamped his carcasses as “DAN”. “Uncle Dan” from then on became his nickname. 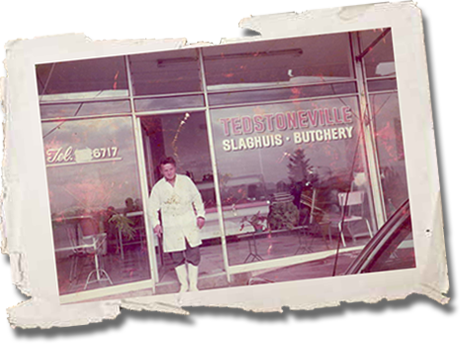 We look forward to hear how we can serve you. Please feel free to contact us or alternatively complete the form below.